Our children and their education (1)

Disconcerting things are happening in the Province of Alberta, Canada. Jonathon Van Maren gives a good overview of the way the New Democratic Party (NDP), a socialist political party that, some years ago, formed the provincial government, is moving. Minister of Education David Eggen will not allow Christian Schools to maintain the position that God's Word supersedes man's authority (in all matters, including those of sexuality). Dissenting schools may have funding and, worse, accreditation withdrawn. We need to pray for our brothers and sisters in Alberta, and for a change in political regime.

These events reminded me of a speech I had delivered some years ago (1996) on the topic of who is responsible for our children--coincidentally to Albertan (and Manitoban) Christian school teachers.

Who must care for the children, for their food, clothing, health, development, education, preparation for  careers in life? Who must give the children leadership in this? Help them make choices? Pay for the costs?

Who has authority over the children? Who decides the direction in which they shall be brought up? The schools they go to? The church to which they will belong? Whom must the children obey? Who is responsible for the children: over against themselves, society, and God?

How we answer these questions has great significance for the present and the future of the child as well as for society and the church. Different answers are given.

Does the child belong to the state?

Preparing for this speech made me open for the first time a book I've owned for many years (Rushdoony, 1966). I read through a number of the essays and was not surprised to read that many people truly believe that the child belongs to the state. This is not a recent belief; rather, it goes back to Ancient Greece. But we do not need to go that far back to show that this is so. 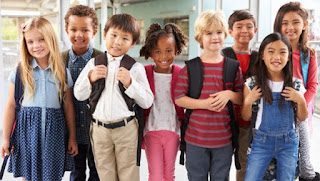 In an essay entitled "John Swett: The Self-Preservation of the State," we read that Mr. Swett spoke of "the children of the State." He said that "... children ... belong, not to the parents, but to the State, to society, to the country" (Rushdoony, p. 79). By this opinion:

Schools are thus not extensions of parental authority, but "wards of the State," extensions of state sovereignty, and so to be respected. Children accordingly become wards of the school on entry therein, and parental rights are forfeited, except, as Swett noted, in private schools. In recognition of this fact, an antipathy to and assault on private schools was not lacking or long in developing (Rushdoony, p. 81).

In another essay, "The Divine Child in the Divine State," we learn that the idea that the child belongs to the state is not unique to late 19th century USA. We are reminded of Adolf Hitler's position: "German youth belong to the Fuehrer" (Rushdoony, p. 109).

At the same time Hitler was expressing his opinion in Germany, the White House made a similar declaration. President Hoover, who presided over the USA during the depression years, issued "The Children's Charter" of the White House Conference on Child Health and Protection. Rushdoony says:

The Charter is a children's "bill of rights" which in effect makes the child both the concern and ward of the State. Pre-natal care, love, understanding, "health protection from birth to adolescence," and "for every child the right to grow up in a family with an adequate standard of living and the security of a stable income as the surest safe guard against social handicaps," these and more were pledged by the Conference (Rushdoony, p. 217).

These notions, that the child belongs to the state, have become well entrenched. In an article in Western Report, Peter Verburg quotes Thomas Fleming, an analyst of culture, who says that "... unlike a century ago, parents and families are no longer responsible for their children." In the context of discussing how the state (society) handles delinquent adolescents, Fleming notes that the standard method is to pass a law:

Prior to the late 1800s, it was an assumption in common law that family members are responsible for each other, explains Mr. Fleming.... [P]arents answered for their child's torts and misdemeanours. If a child stole or broke a window, the father made restitution. The assumption was that he knew or should have known it would happen and could have
stopped it (Verburg, p. 31).

But now, the government has become a surrogate parent. As western society turned ever more from the Word of God, which speaks about these things, children more and more became wards of the state. In 1904 American psychologist G. Stanley Hall published his two volume Adolescence. Social historian Kett (quoted in Verburg's article) says that Hall defined the teen years in Darwinian terms as a distinct state in life that begins at puberty and is marked by inner turmoil. Adolescence "was essentially a conception of behaviour imposed on youth," recounts Mr. Kett, "rather than an empirical assessment of the way in which young people actually behaved." The result was that teens were put into a very special category needing, according to theory, very special treatment from professionals. The influence of parents became less and less appreciated. The state would take care of the education and upbringing of the children (Verburg, pp 31-32).

The Shapiro report, well-known in school circles in Ontario, is informed by the same philosophy. Shapiro's first "Matter of Principle" is:

That [public] elementary and secondary schools are important institutions whose goal is to develop, nurture and enhance the intellectual and moral autonomy of the young. This goal and attendant responsibilities are shared with parents and other societal agencies.

And so we find ourselves today living in a society which largely believes that the child belongs to the state.

But what does the Bible say about this question? We believe that the Scriptures "... are holy and canonical, for the regulation, foundation, and confirmation of our faith. We believe without any doubt all things contained in them" (Belgic Confession, art. 5), also the things it has to teach us about the question: "To whom belongs the child?"