Our children and their education (2)*

The child belongs to the parents

There is only one correct answer to the question of to whom God gives responsibility over the children, and that answer is: Parents! God gives children to their parents. The parents are responsible under God to care for their children in every way. In today's political environment this needs to be underlined. The NDP government of Alberta is mistaken in thinking that the children belong to the state.

Parents must care for the physical well-being of their children

Every parent will agree that it is their responsibility to feed and clothe their children. That is self-evident. It is so natural that we do not, in this respect, need a command of God. Even unbelievers take care of their children. In 1 Timothy 5:8 Paul said: "If any one does not provide for his relatives, and especially for his own family, he has disowned the faith and is worse than an unbeliever." Human instinct powerfully tells us that we must care for our children. It would seem redundant for there to be a command of God in this regard.

Sadly, there are exceptions. There are those who abuse their children, physically, sexually, mentally, and emotionally. There are parents who do not give their children the food and drink they require. Even unbelievers say that such people are worse than animals for such creatures instinctively care for their offspring. Recently there was a mother whale that carried its dead calf for sixteen days, so great was its instinctive love for its offspring. Even without the Bible expressly commanding parents to feed and clothe their children, we all understand that it is their task and responsibility to do so.

Scripture treats it as self-evident. For instance, we read of Hagar who feels it to be her responsibility to find water for her son, Ishmael. In Luke 11:11-12 the Lord said: "What father among you, if his son asks for a fish, will instead of a fish give him a serpent; or if he asks for an egg, will give him a scorpion?" The apostle Paul treats it as self-evident: In 2 Corinthians 12:14 he said: "... children ought not to lay up for their parents, but parents for their children." As we page back and forth through Scripture, we come across a mother beseeching Elisha for the life of her son; a father pleading to the Lord Jesus on behalf of his son; a Canaanite woman begging the Lord to heal her daughter.

Although there is no explicit command in scripture, it is completely clear to everyone that the bodily care of children is the (divine) obligation of the parents. It is wrong and it goes completely against nature for parents to begin to feel this responsibility less and to download it on to others—for instance, the school (the state) providing food for the students.

Parents must care for the spiritual well-being of their children

Who is responsible for the spiritual, intellectual, and moral development of the children and for their  religious upbringing? The scriptures give a clear answer to this question. Even if we were to say that it was a matter of course, natural, and completely in line with the above for the parents also to look after their children's spiritual, intellectual, and moral development, yet the LORD considered it necessary to impress this upon the parents, so that there would be no doubt; so that no matter how strong the inclination may be to download it on to the state or society or some other organization, we would remain convinced that it remains the duty of the parents to look after the spiritual growth of their children. 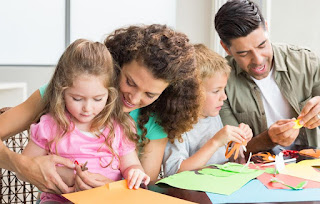 In the Bible, the fathers are called to teach their children about the great things God has done for his people. At the Passover celebration, the fathers were to teach the children about how the lamb was "... the sacrifice of the LORD's Passover, for he passed over the houses of the people of Israel in Egypt, when he slew the Egyptians but spared our houses" (Ex. 12:27).

As you read through the book of Joshua, you come across a number of monuments made of piles of stones. One example: After Joshua had led the people across the Jordan River he set up a monument of twelve stones:

The fathers of Israel were to indoctrinate their children in the great deeds God had done for their salvation. See, for instance, Psalm 78. This task still falls to parents, as the New Testament teaches us. Timothy's mother taught him to know the Scriptures from when he was very young. Paul says in Ephesians 6:4 that fathers are to bring their children up in the discipline and instruction of the Lord.

All of this is nicely gathered together in Lord's Day 39 of the Heidelberg Catechism where we summarize what God requires of us in the fifth commandment. Among other things we say that children are to submit themselves to the good instruction and discipline of their parents. If children must do that, then parents must give good instruction and discipline.

104. Q. What does God require
in the fifth commandment?
A. That I show all honour, love, and faithfulness
to my father and mother
and to all those in authority over me,
submit myself with due obedience
to their good instruction and discipline,
and also have patience with their weaknesses
and shortcomings,
since it is God’s will
to govern us by their hand.

Woe to the father who lets his children walk in self-chosen ways—ways which invariably are the ways of sin! Think of Eli who let his sons do as they pleased and the curse which fell on the house of Eli because of it. Fathers and mothers will have to answer to God with respect to what they have done with the children God had given them. It will be terrible if they hear from the throne the words, "You took my children and made them pass through the fire (Ezek. 16:20,21)." 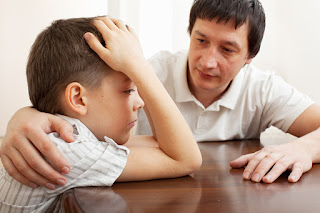 Let these few examples from the Bible suffice to underline in our minds that parents are responsible for the spiritual, religious, and moral development of the child. The child belongs to the parents. Let us not be led astray by the Pelagian notion that we must let the child make up his own mind. Let us not be taken in by those who say that we may not interfere with the spiritual progress of the child, but must, rather, only give the opportunities so that what is hidden in them will come out. Do not be fooled by those who say that we are not to indoctrinate the children. Parents must indoctrinate their children. They must get the doctrine in. They promise that when they present their children for baptism. They promise (third question of the parental baptismal vows) to instruct their child in the doctrine of the Holy Scriptures. Doctrine is not a dirty word. Let us not believe those who would have us believe that the children belong to the community, or the state.


We must consciously maintain the teaching of Scripture that the child belongs to the parents. The parents must care not only for the physical well-being of the children God gives them; they must also be busy with the spiritual development of their children. For children are a heritage from the LORD (Psalms 127 & 128). The LORD gives the children to the parents. Before the LORD, parents are responsible to raise their children in the fear, knowledge, and discipline of God. It is the task of parents to lead their children to Christ. It does not take a village to raise a child; it takes godly parents to do so. Parents may not abrogate this responsibility.

However, as we will see in the next installment, this responsibility and obligation is not absolute.