(As published in a recent Clarion)

Remember your mercy, O LORD, and your steadfast love, for they have been from of old.—Psalm 25:6

King David, by the inspiration of the Holy Spirit, wrote beautiful words. He asks God to remember his mercy. Some translations speak of tender mercy. That gets the idea across well, for the word for mercy is about the same as the Hebrew word for womb. As a mother's womb encircles an unborn child, and as a mother naturally has love for the child in her womb, so David asks the LORD to look upon him with tender mercy. As a mother has feelings of love and tenderness flowing to her child, so David prays for feelings of love and tenderness to flow from God to him. If a child is hurt she wants her mother, and mother's heart opens wide for her hurting child. Soldiers injured on the battlefield and ending up at death's door will call out for their mothers. So David calls out for his God. 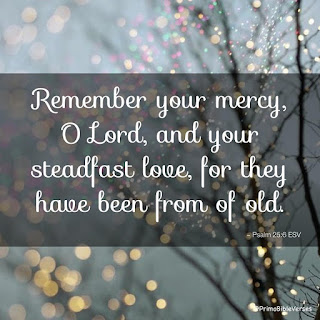 David also asks the LORD to remember his steadfast love. A special word is used here that speaks of the love the LORD has for his covenant people. The people with whom he has a relationship of love. We are those people. He has love for us together as his people, and for each of us personally. Relish his love like you bask in the warm sunshine! Rest in his love!

You see how King David called upon God as LORD—“LORD” with four capital letters in our English translation. That is the special covenant name of God by which he revealed  himself to Moses at the burning bush. There God revealed himself as the covenant God of love. He is not like other gods who are cold, unmoving, and impassive. Or like gods who are so cruel they demand the sacrifice of firstborn children. Oh no; he is the God who has tender mercy and steadfast love for his people.

King David says that there is a solid reason for his prayer: “For they have been from of old.” He could have said that he was praying for tender mercy and steadfast love which have ever been from of old, and he would have been saying something true. But that is not quite what he said. He used the word “for.” For, since, or because they have been from of old. David asks God to deal with him in tender mercy and steadfast love because that is who the LORD is. That's the way he has always been. That's what he is like. From of old, since Adam & Eve, Noah & his family, Abraham & Sarah, the children of Israel—throughout the ages, the LORD has acted tenderly and lovingly toward his people.

Perhaps you are saying to yourself, “Well, Pastor, I'm not feeling much love right now. You don't know the trouble I've seen.” Well listen; I can't explain your troubles. I can't explain why God is leading you along the dark and scary paths. But I can tell you about a child of God named Paul who had such a disability that he stopped everything to ask the Lord to take it away. And Jesus answered, “No Paul; you need to learn that my grace is sufficient for you.”

That's what we need to learn too. The grace of God is enough.

Questions for further study: Is the steadfast love of God sufficient for you? Why or why not?
How could you get to the spot where you say: “The grace of God is all I really need”?