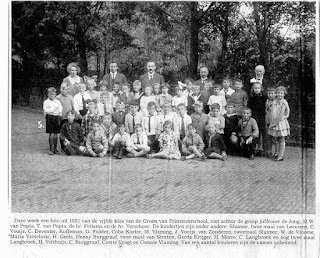 Here's another photo of my Grandfather Taeke van Popta. He is the man in the centre back. The picture, taken in 1931, is of the fifth grade of the "School met de bijbel", the Groen van Prinsterer School in IJmuiden, of which he, for many years, was principal. By the time he died in Sachsenhausen concentration camp, half the people in IJmuiden had attended his school (according to his daughter-in-law, Ida Visser van Popta).
Posted by George van Popta at 4:45 PM