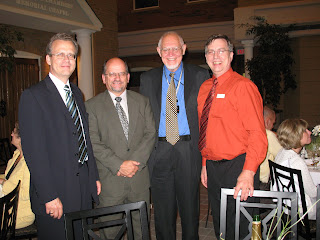 Bloom where you're planted said...

What a neat picture to 'capture' the four of you together in one location. I especially think my uncles look smashing! When do you head off to Ottawa?
Love,
niece deborah

We are moving in August.

I think UJ is wearing orange in honour of the Dutch soccer team.

Nice picture. It also struck me how those VanPopta brothers have such great taste...or maybe their wives do. :) I wonder if I bought something burnt orange if Wes would wear it...Moores does have a sale on right now.

Yes, they were vacant for 19 years between Krabbendam and Visscher. A long time!