An album of Chris Nobels' music

Chris was born in Rotterdam, the Netherlands, in 1938, and immigrated to Canada in 1953. For many years Chris was an organist at Grace Canadian Reformed Church in Brampton, Ontario. Over the years he composed various preludes and chorales for all 150 Genevan Psalm tunes. As well, he created some new arrangements for various canticles, hymns, and other pieces. 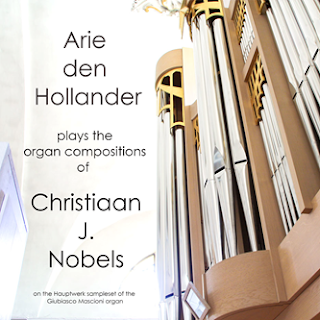 Arie created a web presence with links to all of Chris’s arrangements. Please see here:
christiaannobels.com. This page is a treasure trove for accompanists and choir directors. All the music may be freely downloaded as PDFs. Chris wanted freely to share the gifts God gave him, and so does Arie. The only stipulation is that they not be reproduced for re-sale.

Arie’s album is now available on many music-streaming platforms (please see below). Listen to your soul’s comfort, your heart’s content, and your ear’s delight. I am no musician, let alone organist, but I can hear that Arie’s playing of the various pieces is beautiful, disciplined, artistic, and musical.

Chris lived, served, composed, and accompanied to the glory of God alone. Arie’s purpose is to preserve the musical legacy of a dear brother who was a gifted musician and a gift to the church.

Arie writes, “On April 18, 2015 the LORD called Christiaan to his heavenly home where he has joined in making music with the heavenly choirs.”

May the LORD God be enthroned on the praises of Israel (Psalm 22:3).

Twenty of Chris’s preludes, chorales, meditations, and a fantasia, are included in the playlist on the following platforms.

Arie den Hollander is an organist at Trinity Canadian Reformed in Glanbrook and can be reached at adenhollander@fortesolutions.ca