On Remembrance Day, at the Memorial, I thought of my paternal grandfather, Taeke van Popta, who died during WW II in Sachsenhausen, a concentration camp near Berlin. Taeke was involved in the underground movement against the Nazis. He was betrayed by the Nazi-sympathetic mayor of IJmuiden, the Netherlands, and died of dysentry. After the war, the mayor was tried, convicted and shot for his crimes, inluding the betrayal of Taeke. 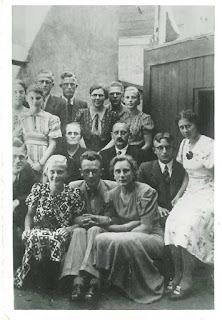 My grandfather is seen sitting here in the middle of his family in happier times.
Posted by George van Popta at 12:01 PM