John Calvin wrote these magnificent words in the preface to the Psalter he published in 1543:

As for public prayers, there are two kinds: the one consists simply of speech, the other of song…. And indeed, we know from experience that singing has great strength and power to move and to set on fire the hearts of men in order that they may call upon God and praise him with a more vehement and more ardent zeal. It is to be remembered always that this singing should not be light or frivolous, but that it ought to have weight and majesty…. Now, what Augustine says is true, namely that no one can sing anything worthy of God which he has not received from him. Therefore, even after we have carefully searched everywhere, we shall not find better or more appropriate songs to this end than the Psalms of David, inspired by the Holy Spirit. And for this reason, when we sing them, we are assured that God puts the words in our mouth, as if he himself were singing through us to exalt his glory.

When John Calvin arrived in Geneva in 1536 there was no congregational singing in the worship service. Before the Protestant Reformation, laypersons were expected to stand mute as the music was given to the priests and cantors. The clergy sang long-winded Latin sequences that were incomprehensible to the people. Under the influence of the reformers the church in Geneva had banned all music from worship so that there was no singing at all. Calvin and other ministers, concerned about a coldness of worship, tried unsuccessfully to introduce congregational singing of Psalms for the edification of the people and the praise of God.

In 1538 Calvin left Geneva for Strasbourg, where he served a French refugee congregation for about three years and where the German Protestant congregations had, by this time, been singing the Psalms for about a decade. While in Strasbourg Calvin began to develop a French Psalter, and in 1539 he published Aulcuns pseaulmes et cantiques mys en chant, a songbook of nineteen Psalms and two canticles, the Ten Commandments and the Song of Simeon. A metrical version of the Apostles’ Creed was also included. Six of the Psalms were from Calvin’s hand while thirteen had been composed by Clement Marot, the distinguished poet laureate of the court of King Francis I of France.

When Calvin returned to Geneva he continued to develop the Psalter. He and the other ministers of Geneva pursued the matter of congregational singing, and this time they were successful. The following, dated 1541, was recorded in the minutes of the church council:

It will be desirable to introduce songs in order the better to incite people to prayer and to the praise of God. To begin with, the little children shall be taught, and then in course of time the whole church will be able to follow.

At last, in 1562, after several other editions (1542, 1543, 1551), the Psalter was complete. It included 49 texts prepared by Clement Marot and 101 from the hand of Theodore Beza, scholar and professor in Geneva. Calvin had withdrawn his own contributions, deferring to these two superior poets. This Psalter became a bestseller in Europe: thousands of printings rolled off dozens of presses. Calvin’s songbook was eagerly embraced by Protestants, and even by many Roman Catholics who were happy to be able to sing the Psalms.

The peculiar beauty of the Psalter has always been found in its extensive variety of tunes, simple rhythm, fascinating modes, and complex rhyme schemes.

The “Genevan tunes” were mostly new compositions by musicians such as Guillaume Franc, Louis Bourgeois, and “Maître Pierre,” whose real name was probably Pierre Davantès. Although it was Calvin’s wish that each Psalm should have its own unique melody, this goal was not achieved. The Psalter contains 125 different tunes, some being used for more than one Psalm. Several tunes, for example, Psalm 80 and Psalm 141, were borrowed from Gregorian chants.

The rhythm of the songs is simple; it consists of two values, half and quarter notes. The pulse, or tactus, falling on the half note should be about the same as the resting heart rate of an adult.

Rather than major and minor keys, nine different modes are used for the tunes (see the list on pages vii-viii). The most common mode is the Dorian, which is the scale “D” to “D” using only the white keys.

The complex rhyme scheme includes more than 100 stanza structures and over thirty rhyme patterns. This is quite different from Psalters that rely heavily on common and long metres. 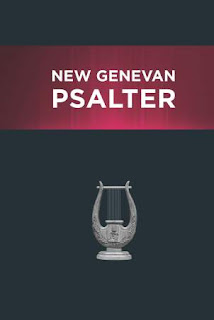 Because Calvin intended the songs to be primarily for the congregation rather than a choir, the intervals between the notes are small and each tune is within an octave. He insisted that the congregation sing in unison to emphasize that God’s people sing praise to the Lord with one voice, and so the Psalter did not have the music in various voices. A single line of music, rather than four parts as is common in almost all contemporary North American hymnals, might look odd to some, but it has been maintained in this Psalter to be true to Calvin’s original intent of unison singing. However, harmonies for home and choir were composed for all the Psalms by Claude Goudimel, a composer of Calvin’s time, and are still readily available.

The impact the Genevan Psalter has had on the worship of Reformed churches cannot be overstated. Although published 450 years ago, the Genevan Psalter has been consistently used by churches throughout the world and is growing in popularity. Throughout the centuries it appeared in many European languages as well as in Latin, Malay, Afrikaans, and Tamil. In recent decades new versions have been produced in Asia—in Korea, Japan, and Indonesia.

The Canadian Reformed Churches have published several English versions of the Genevan Psalter, the first complete edition appearing in 1972. The aim of the current revision was to improve the songs’ literary quality and to bring them into greater harmony with the biblical text.  As such it is not a translation of the original sixteenth-century French version but a new poetic rendering of the entire Book of Psalms and of the four canticles long associated with the Genevan Psalter, the Ten Commandments and the Songs of Mary, Zechariah, and Simeon. Much of it is the work of Dr. William Helder. For complete authorship and copyright information, see pages 374-75. The text of the songs found in the New Genevan Psalter was adopted by the 2013 General Synod of the Canadian Reformed Churches for their songbook, Book of Praise.

In response to the ever-increasing interest in and appreciation for this precious legacy of John Calvin, it was thought good to publish a new English Psalter without the specifically Canadian Reformed elements that are included in the Book of Praise. With gratitude to our God we present the New Genevan Psalter to the English-speaking church. May our God be “enthroned on the praises of Israel” (Psalm 22:3) through the use of this book. To him alone be the glory, now, and forever!

The Psalter can be purchased from Premier here.